donotbuyahousefromthelandbankdotcom
do not buy a house from the landbank dot com

Don’t get me wrong, do NOT get me wrong: I do love my house, and I did buy it from the Landbank. But the Land Bank Authority (LBA) website, auction/sale process, and subsequent rehabilitation rules are so onerous, so costly, and so full of subterfuge and opacity, that I would not recommend it to most people. This is a change from the original intention of this blog, DETROIT REALITY REALTY — to get people to buy a house from the ‘the list’ — formerly held by PDD (Planning and Development Dept.) but now all those houses, that ‘inventory’ has been relocated to the Land Bank and they are in charge of the sale process. Here is a link to my house on the LBA’s website, buildingdetroit.org, so you can see what it looks like when you consider buying a house: http://auctions.buildingdetroit.org/Listing/Details/1094770/20499-Grandview 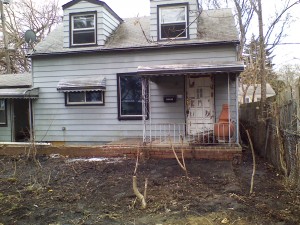 Although I read and generally understood the rules and process, some of the costs are hidden, and not plainly spelled out in the Rules Here is the link to the Rules: http://auctions.buildingdetroit.org/TheRules For example, I bought my house for $1000 — good price, right? But what they don’t tell you up front is that you MUST pay for the pre-sale inspection that they, LBA, did — even though pre-sales are no longer required by the City — this costs $295. http://www.detroitmi.gov/DepartmentsandAgencies/BuildingsSafetyEngineeringEnvironmental/Divisions/Pre-Sale/Pre-SaleRequirement.aspx

They also don’t tell you, nor help you estimate, the cost just to pull the required permits to do the work that the pre-sale sez you gotta do; for example, I paid $376 for just two permits: Electrical and Plumbing– and my house is very small — just one bathroom, and 550 square feet total L/S

And then there’s the closing costs — LBA uses this third party closer called TitleSource — but they aren’t even listed on their official and approved contractor list.

When I closed last June on Harmon Street house, the closing costs were $18. How (or why?) in the world have these cost skyrocketed over 1000%? Some one (TitleSource) is making money off of people’s good intentions to buy and save a house in Detroit. These houses should cost only what they cost at auction — no further fees, costs, permits, etc. !

So the presale, closing costs, and permits have cost me over $1000 — I had not budgeted for that.
That’s money I could have spent on a plumber, an electrician, on a kitchen sink, drywall, a hot water heater, insulation, or other materials or services to actually re-hab my house.

Then there’s the inspection process. . . Because I have permits for both electric and plumbing, I need to get an inspection, both rough and final. This is normal for construction and/or remodeling a house. But LBA also gets to inspect the progress and final features of a house it sells — how is this okay? The pre-sale inspection requirement is what drive Detroit neighborhoods and houses into dereliction and abandonment — who could pay $300 bucks for the pre-sale AND untold money for the subsequent repairs that the City bureaucrat inspector surely would find: fix this fix that you can’t sell the house until these repairs are made! Again, this is why so many people just said f-it, we can’t pay nor do the repairs!

The Landbank is starting a whole new regime of pre-sale + inspections!

UPDATE APRIL 3, 2015: SERVICE AFTER SALE — no one at the Land Bank will now talk to me or help me — I called, texted and called back the guy who is supposed to be in charge of the locks on the doors of LBA house (Mark P) — he was hard to reach and has not yet solved the problem of the lockbox on the front door. Also, Herb Alexander and Rob Saxon have refused to acknowledge my emails asking them for relief and a refund from the pre-sale inspection. There is no service after sale at the LBA. HERE IS AN EMAIL I JUST SENT TO THEM ON APRIL 7:

This is a third send of the following requests, with additional remarks; as none of you have responded, it was necessary to resend this information:

1) Signage: Because my house (nor other LBA houses?) did not have a for sale sign or any other kind of sign in front of it, the neighbors were not immediately aware of its fate, nor that it was sold, nor that I was/am the lawful buyer. Because of this, they have been mistrustful and thought I might be another scrapper — thus I would suggest that you consider putting traditional for sale signs with your LBA brand on your houses — this would help build community and foster professionalism.

2) Lockbox: There is still a realtor-style lock box on my house’s front door; I called + texted Mark P (the contact person given to me by Mr. Cannon) — I finally got through (his mail box was full)  but that was last-last week — he has done nothing. Please help me to get this lock box open so I can ostensibly get the keys out of it for my front door(s).

3) Unlawful pre-sale inspection: LBA should refund me the $295 for the unlawful pre-sale inspection — the City rescinded pre-sales in Nov. 2014, as you know — the LBA cannot lawfully require buyers to absorb this cost. I have put in for a refund at BSEED for the pre-sale — I am asking that you at LBA make sure I get that refund — THIS WAS SUBMITTED ON MARCH 13 AT THE CITY BUILDING 4TH FLOOR WHERE YOU GET THE PERMITS.

I would appreciate some evidence of service after sale.